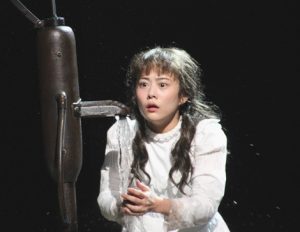 Helen before having acquired language skills, would often lose her temper once things didn’t go her way.
Whenever she was upset, as soon as something fun happened, she would get excited soon after.

This behavior sounds like that of an animal.
Just like a dog that barks at a stranger who visits your house, and feels happy after being fed by that person.

Below is a diagram of Helen’s mind before language acquisition.

“Consciousness” perceives the external world by seeing, listening and touching it directly.
Your mind has emotions.
Emotions is a pattern of perception, and animals only have simple ones such as anger, happiness and fear.
These were the only emotions Helen had before she acquired words.

The next diagram shows the structure of her mind after language acquisition. 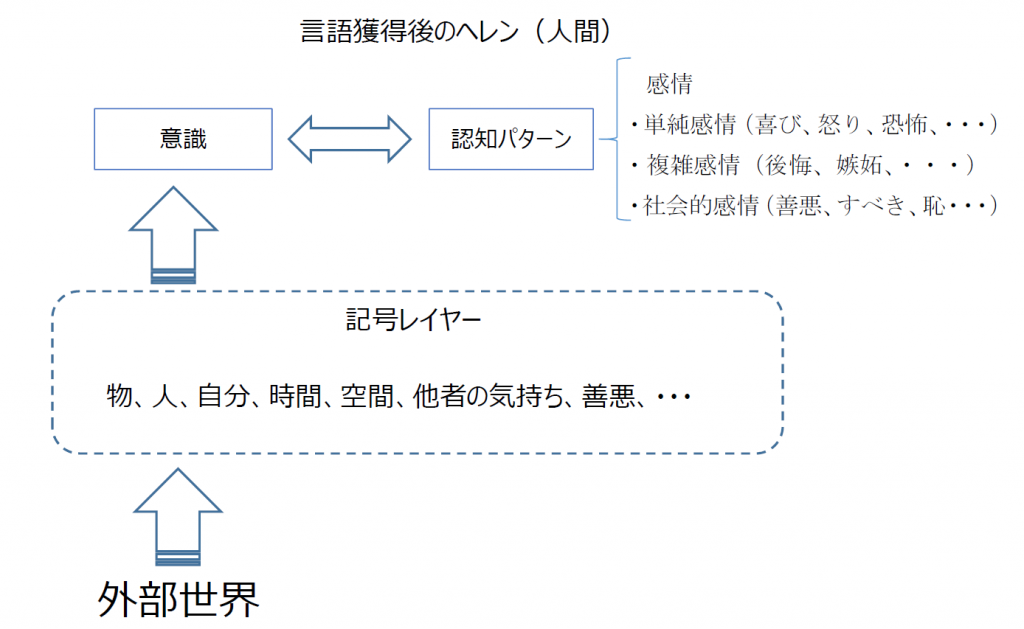 Consciousness identifies the information which the external world produces via words.
Words are symbols.

Here we call a domain which languages control “symbolic layer”.
“Layers” as in Photoshop.
Consciousness perceives the external world through symbolic layers.

Among symbolic layers there are symbolizations of things exist in the external world.
House, desk, chair… miscellaneous things.
Also, people, father, mother and teachers can be symbolized.

Not only objects that can be seen and touched, concepts of time such as yesterday, today and tomorrow can be symbolized, too.
In addition, emotions of happiness and sadness, as well as social norms of right and wrong can be symbolized as well.

Consciousness perceives what are symbolized.
Therefore, by perceiving the world through symbolic layers, it can identify stuff such as time and rules which cannot be perceived by perception only.

Then emotions are generated after putting symbols into patters of perception.
Patterns of perception include complex emotions like “regret” and “jealousy”.

Simple emotions like happiness and anger exist in the mind of animals too, but complex emotions like regret and jealousy, as well as emotions of right and wrong and shame are only possessed by human beings.
To understand “regret”, you need to acknowledge your actions objectively.
To acknowledge yourself objectively, you must use “symbolic layers”.
Helen before her language acquisition, only had simple emotions such as anger and happiness like an animal.
Nevertheless, once she acquired words, upon seeing the doll she had destroyed that morning (before language acquisition）, she fell into the sense of regret “what have I done”.
Having acquired words, human mind arose in her.

Here let us go back to the structure of Helen’s mind before and after language acquisition. 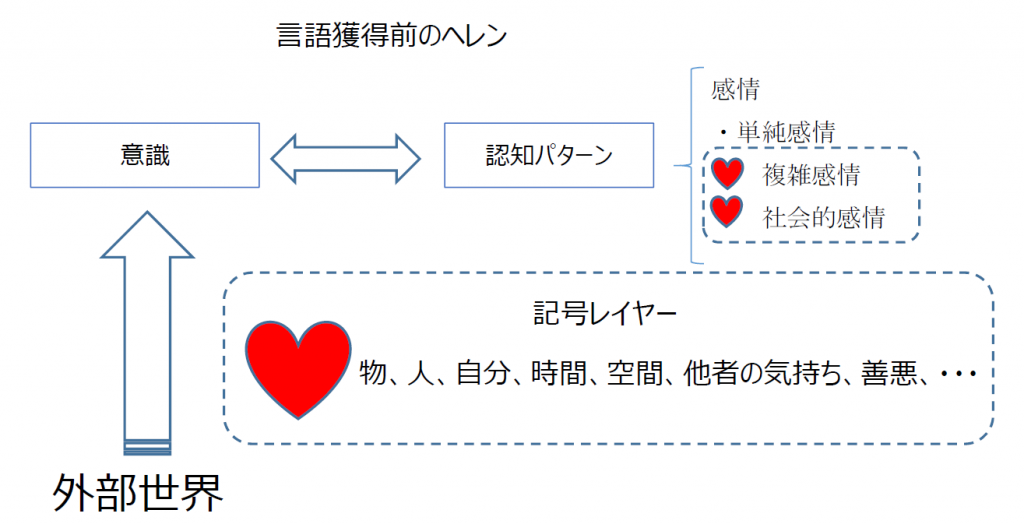 The parts with ♡ are the functions she has gained after language acquisition.
These are the core parts of human mind.

To understand the meaning of what happened to you, is to put it into patters of perception and have some emotions generate within you.
Patters of perception that can only be possessed by humans such as regret, jealousy and right and wrong, are composed of things such as time and self that only exist in the realm of symbolic layers.

Here I would like to emphasize that the core parts of human mind such as symbolic layers and patters of perception were already possessed by Helen before she had acquired words.
Hence her mind was not developed as she learnt words.
The evidence lies in the instance where Helen experienced the emotion of “regret” for the first time, 10 minutes after she had realized that “w-a-t-e-r” is a “name”.
It means that the emotion of “regret” was not created within this 10 minutes.
It means that the emotion of “regret” which had already existed yet to be used was now accessible after gaining words.
Symbolic layers which would have been accessed naturally, had not been accessed by Helen’s consciousness for her blindness and deaf.