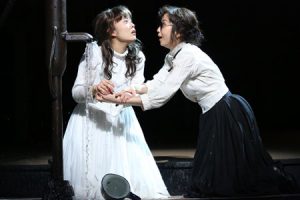 Mrs. Sullivan spelled the word “w-a-t-e-r” on Helen’s palm countless times while letting the water from the well touch her other hand.
In that moment, Helen realized something very important.
That “w-a-t-e-r” is the “name” of this liquid that runs on my hand.
This was the moment she noticed the concept of “names” for the first time in her life.

That every object has a name.
The moment she realized the concept of “words” itself.

This is the story depicted in the movie “The Miracle Worker”.

Until this part I have written in the last post.
Today I’m going to continue on it.

In the autobiography of Helen Keller, “The Story of My Life” there is an after-story.
Having realized that the world is composed of “words”, it has completely changed her world that she had been known of. Confused, Helen came back home.
There awaiting the doll she was gifted by Mrs. Sullivan that morning.
The doll she had thrown away on the floor because she didn’t like it.
When she noticed the doll, what hit her was the deep sense of “regret”.

The doll Mrs. Sullivan had gifted me.
She had probably gifted it for thinking Helen would love it.
Without considering the feeling of Mrs. Sullivan, she lost her temper because she didn’t like it and broke it by throwing it away on the floor with all her might.
It was herself, who broke it.

The feeling of “regret” can only be understood when acknowledging the action of one’s own “objectively”.

Then what happens if one identifies the external world by symbolizing it, instead of directly trying to identify it?
To identify it by symbols, is to identify “water” as “w-a-t-e-r”, not as the cold liquid that runs on my hand.
If one can symbolize everything that exists on this planet, one will be able to include oneself in that, too.
This is how we can objectively identify ourselves (cf: Subjectivity and objectivity).

To symbolize means to associate the meaning (a real object such as water) and with the symbol (its name w-a-t-e-r).
By symbolizing, you can associate many different things related to “water” besides the water you are feeling now.
“Water” which runs from the well and “water” that was in a cup yesterday.
You can identify objects from different circumstances as the same “water” by finding the commonality.

Even in different circumstances, as long as you can realize that they’re the same, you can understand the opposite, as well.
That the same thing will change over time.
A fresh apple, despite its rotten appearance over time, is still the same apple.
This suggests you understand the flow of time（cf：Time does not exist in reality. Time is a fantasy）.

Understanding the flow of time, and identifying yourself objectively, allows you to have a feeling of “regret” for the first time.

And, I’m the one who destroyed it.
I shouldn’t have done it.
But I can’t go back in time, ever.

This is the “regret”.

Helen who had just acknowledged the concept of words, only ten minutes later met with a sense of “regret” which she had never faced before.

It wasn’t just words Helen had learnt from the running water from the well.
It was much more important than words.
It was human “mind”.

In the next post, I’m going to read deeper into the relationship.