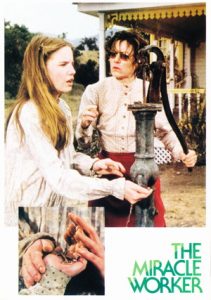 I first watched “The Miracle Worker” by Helen Keller on a movie screening day at my primary school. At that time, dubbing was yet to be widespread in Japan so there came a speaker, Benshi, who translated the script of the movie at the screening.
The old translator guy would change the tone of each cast  when talking as a little girl, he would squeak  I soon got used to his style and found it very impressive as a child.
This Benshi was introduced as the last existing speaker in Japan; thinking back now, maybe this was because we were in Kobe, the birthplace of movies in Japan.

As you may already know, Helen Keller was known as having a triple handicap  being blind, deaf and unable to speak.
One of the most monumental scenes in “The Miracle Worker” is the last scene where Helen drinks water from the well crying out “water, water”.
This captures the very moving moment in which Helen, who cannot see nor hear hence unable to comprehend words at all, realized that there are names for objects for the first time in her life.

When I first started my research on AI, I remember wanting to know more about topics such as “what is mind” “differences between animals and humans” or “what is a language” – I would read through studies about teaching chimpanzees how to speak, books written by patients with autism, or a record of a girl who was raised by wolves.
That’s when I became interested in the case of Helen Keller and read “The Story of My Life”, autobiography of Helen Keller.

As I dove in the book, I noticed a little difference in the story, as I’d remembered from the last cene of “The Miracle Worker”.
It wasn’t a difference, rather, I noticed something significant happen afterwards.
10 minutes after she had realized that everything has a name for its own, Helen regained the most important thing in her life.

That is, in short, human “mind”.
Yet, Helen herself was not aware of the importance at the time. She only mentioned it in a sentence.

The biggest difference between human beings and animals is whether they speak or not.
Although I had known of the rooting cause of humanly mind being related to language skills, I had never been sure of the causality of it; until I read that sentence and I remember having been deeply convinced “hey, now I know how it works!”.
Finally, I was beginning to see the connection of “word-mind-consciousness” as if fog had cleared away.

Relationship between word and mind.

You need to at least understand it, or else as much as you will be able to speak words with the help of AI, you wouldn’t develop humanly mind.
Hence from this post on, I will be explaining the relationship between words and mind analyzed through the life of Helen Keller.

Let us begin from the day she has understood words and retrieved human mind.
Let us look at a series of events that had happened in the morning on the day.

A few weeks before this, Mrs. Sullivan had begun teaching Helen spellings of things by letting her touch the objects and writing the spells on her hand with finger so to teach her that everything has a name.
Helen, being a smart child, would soon learn to imitate her  however, she had yet to truly understand the meaning of “names” that objects have.

On the day before, she tried to teach Helen the difference between “water” in a cup and a “cup”; nevertheless, Helen could not fully understand the concept.
On the day, she had given her a new doll and taught her that it was a “doll”.
She was trying to teach her that a doll, different from the previous ones, was similarly a “doll”.

However, Helen, upon disliking the new doll, threw it on the floor with her might and broke it.
A 7 year-old Helen would always lose her temper once things didn’t work out the ways she’d wanted them to be.
That was because she had been spoiled by her parents on the account of her disabilities.

The doll which she had broken by throwing it on the floor, swept by Mrs. Sullivan to the edge of the room, she later wrote that she was satisfied with the outcome.
Shortly after, upon sensing Mrs. Sullivan pull out her hat and finding out the next activity to be outside study, she was excited.

This is the demeanor of Helen Keller when she didn’t understand a word.
Getting upset when things don’t go her way; getting excited when things she likes happen.

Taking actions judged on the mood on the spot sounds like animal-like, rather than humanly.

This girl, was forever changed, on that afternoon, after having touched

the water of the well.