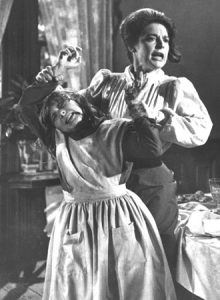 Helen Keller, who had been raised spoiled for being blind, deaf and unable to speak.
Mrs. Sullivan struggled to teach her words.
On that day too, selfish Helen didn’t like the new doll gifted by Mrs. Sullivan; losing her temper, throwing it away on the floor and breaking it.
This was the story of the last post.

After, Mrs. Sullivan who had taken out Helen, took her to the well.
There, she wrote the letters “w-a-t-e-r” on her hand multiple times while letting her touch the cold water streaming from the well.

In that moment, Helen felt she remembered something important.
Now she was paying all her attention to the movement of Mrs. Sullivan’s fingertip.
Then suddenly, a world she had known for all her life collapsed in front of her; a whole new world appeared.

On the other hand, she was able to easily connect words such as pin, hat and cup with their spellings.
But this alone wouldn’t prove that she can understand it.

Even a dog, when called by its owner with its name “Pochi”, comes running to the owner.
This example at first may show that it is understanding its own name; but this dog is only associating the condition of being called “Pochi” and running to the caller will give him a treat, the action.
This dog is not necessarily acting upon the understanding of its name as “Pochi”.

Hence, Helen’s understanding before was the same as that of a dog.
She was only playing a game in which, she was handed a doll and by spelling it a “d – o – l – l” will grant her a compliment from her teacher.
Helen would only use the word “doll” to certain dolls she was given, not to its general meaning.

Given that, Mrs. Sullivan decided to teach her that the word “doll” can indicate not just the same old doll, but also other dolls as well. She gave her a new doll in that morning.

Then, to demonstrate that the cold water running from the well now, was the same water that was inside the cup yesterday, she spelled the word “w-a-t-e-r” on her hand.

The water inside a cup and the water running from the well.
Totally different situations, yet the same “w-a-t-e-r”.

To understand this phenomenon, one needs an ability to replace it with abstract “symbol” called words, not just acknowledging what it is in the reality.
Human beings are equipped with such ability.
They voice what they see with words and hear them.
Raised in such an environment, people will naturally be able to express “things” in “words”.

However, Helen, being blind and deaf, didn’t grow up in an environment where “things” in real life were replaced by words and being heard.
She went on living like this without having developed the ability to convert “things” to “symbols” until she was seven.

That changed when she acknowledged that the running water from the well had the same spelling as the water in a cup.
Her ability to symbolize was exercised.
That was when she truly comprehended the meaning of the hand-spelling game.

Things that she had spelled on her hand were actually names of things.
“Names” are things in real life which are abstracted and symbolized.
She finally realized that everything in this world has its own name.
With “names” you can freely express the world.
That is “words”.

The last scene of the movie “The Miracle Worker” where Helen cries out “water, water”, shows her great surprise at that time.
That everything that exists in the world has a name.
“Water”, “grass”, and “tree”. Everything you touch has its own name.
“water!”, “grass!”, “tree!”
Helen running through the field screaming the names of everything she touches.

The reality she had long acknowledged collapsed; and with a new world view called “words” rewriting her world.
That scene depicts the impact and impression Helen felt very nicely.

Now this is the story which was told in the movie “The Miracle Worker”.
I’m sure everyone remembers it the same way.

Nevertheless, in the autobiography Helen Keller “The Story of My Life” had an after-story.
The first thing that Helen faced after having realized the fact that the world is composed of “words” was the doll in the morning.

The very doll she had thrown away on the floor with her temper.
When she faced the doll, Helen felt so much impact than before.