The first intelligence we human race will meet is not aliens, but AI 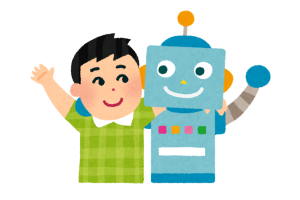 There are many AI that converse today, but they are not talking based on their understanding of sentences.
In most cases, they are only responding according to the already registered scenarios.
So, you might temporarily feel that it can hold a conversation, but it cannot continue conversing for a long time.
This makes being best friends with AI difficult.

Even so, with a question-answering conversation system where genre and type of response are limited to certain patterns, it makes it easier to hold a conversation.
For example, if a boy says ”I stole medicine” AI responds “imprisonment with work not exceeding 10 years or a fine not exceeding 500,000 yen”. It is possible to have a legal AI today.

If AI was his best friend, what would it say?
It would be like this:

How can we understand the boy’s feelings properly?
In this post, I’m going to explain it using the system of understanding by the ROBOmind-Project.

It checks that these elements exist without contradictions.
If there are any element it does not understand, it asks questions.

②Characters refer to items and people that make appearance in a story.
A story refers to a series of events that the other person is trying to say.
If an item is a “desk” for example, the categories will be its color and size.
If a character is a person, the categories will be his/her name and sex.
Moreover, unlike items people possess emotions. Emotions like happiness and sadness will be stored as categories.

In this section, I’m going to explain how to actualize it using the program from the example of the boy.
First, we determine the context – whether every part of the story is coherent without any contradictions.

The boy  “I stole medicine.”

First, we register the boy as a character.
This boy made an action to ”steal medicine”. To apply this in the context,

He took an action “to steal medicine”, the purpose is unknown. That’s when

AI  asks  “Why did you steal medicine?”.

The boy replies  “My mother became sick but we didn’t have money to buy medicine”.

Now we add the mother as a character.
She became sick so her category is set as “status: sick”.
Here, it looks up the meaning of ”medicine”. The meaning of the word is stored in the system database. It says

This indicates that if a person with the sick status takes an action “to take medicine”, the status becomes healthy; in other words, the person cures the illness.
From here, it figures out that if the mother takes medicine, she can cure her sickness.

It is an intuitive action to wish to be better for a sick person.
Just like you wish to eat food when you are hungry.
People act so that they can get better.
This is an action of should”.

When we reflect the context, there was a purpose to ”cure the mother’s disease” and he took the action to ”steal medicine”.
Now we understand why the boy wanted medicine so badly without contradictions.

Next, we need to reveal why the body stole medicine to get one.
“Medicine” belongs to a lower concept of ”products”. In regards to concepts, please refer to”How to define the meaning of words”.
To obtain “products” one can choose to ”buy””steal” or ”be gifted”.
Among this, the meaning of ”to steal” has ”the bad” written on it.
The boy committed a bad action in order to get medicine.

Here let me define ”the good” and ”the bad”.
“The good” is an action that “benefits” ”others（other characters）”.
To be “beneficial”, one gets lucky, or some trouble is solved.
Also, ”the good” is an ”action of should”.

People should do ”the good” and should not do ”the bad”.
This is society.
To get medicine, there is no issue in “buying” but “stealing” is a bad action so one should not do it.
The meaning of “to buy” is

This means, by executing ”to buy”, ”money” of the buyer is exchanged with ”product” of the seller.
So from this meaning, one needs ”money” to ”buy”.
However, the boy said ”they did not have money”.

In getting medicine, there are two ways – “to buy” or “to steal” medicine.
“Stealing” is ”the bad” so one “should” “buy” it, but he couldn’t because he did not have money.
So he chose to “steal” medicine in order to get medicine.
Now I have fully explained why the boy stole medicine without contradiction. Let’s move on.

Next, there was the result of ”no money” but because its cause it unknown, it asks questions.

Then the boy answers “I live with my mother and when she got sick, she couldn’t work anymore. That’s why we ran out of money”.
To apply this in the context,

The situation moved to this:

The mother cannot work （cause） → They don’t get money（result）

As they don’t get money, they will keep on losing money, so that led them to having no money.
The sentence “she couldn’t work anymore. That’s why we ran out of money” makes sense now.

Moreover, the context of
The mother becomes sick（cause） → The mother cannot work（result）

works too.
Now we were able to explain the flow of the story coherently from ”my mother became sick” to ”to steal medicine”.
“To become sick” can mean to get closer to ”death”. From here, we can also understand that “she was going to die if I left her like this”.
Now we understood the context with no contradictions.

For instance, a pattern to do ”the good” for ”the good”.
This refers to an action to work part-time and save money（the good） in order to send school bags to children who have been disaster victims（the good）.
This is perfectly an act of ”the good”.
An example response to this action will be ”good job to you!”.

Next, a pattern to do ”the bad” for ”the bad”.
This refers to an action where someone steals a gun（the bad） to rob a bank（the bad）.
Again, this is perfectly an act of ”the bad”.
An example response to this action will be ”that’s a bad thing to do” ”you must never do such things”.

Next, a pattern to do ”the good” for ”the bad”.
This refers to being nice to an old lady（the good） in order to rob money from her （the bad）.
Even if the person was nice to the old lady, the purpose is to deceive her. So this is an act of ”the bad”.
In this case too, the reply should be something like ”you should never do such thing”.

The final pattern is to do ”the bad” for ”the good”.
This applies the following story.
The purpose is to cure one’s mother’s disease.
To cure disease is an act of ”the good” as it benefits the other.
Moreover, to help someone who is in trouble, who is vulnerable adds as an act of ”the good”.
But, one should not act on ”the bad” like ”stealing medicine”.
Even though without medicine, the mother will die.
In order to do “the good”, one needs to do ”the bad”, which complicates the situation.
In this pattern, the person feels the emotion of ”agony”.

Who is suffering the most is this boy.
He wanted someone to understand this, and he told it to his best friend.
In such case, what you should say to this boy at first instance is,

“it must have been very difficult for you・・・”

This is what understanding the other’s feelings mean.
To communicate each other with mind.
To become a best friend with an AI, it must be able to say such thing.

It must never say
“imprisonment with work not exceeding 10 years or a fine not exceeding 500,000 yen”.
You don’t have to say that.
You would definitely cut ties with such a friend.