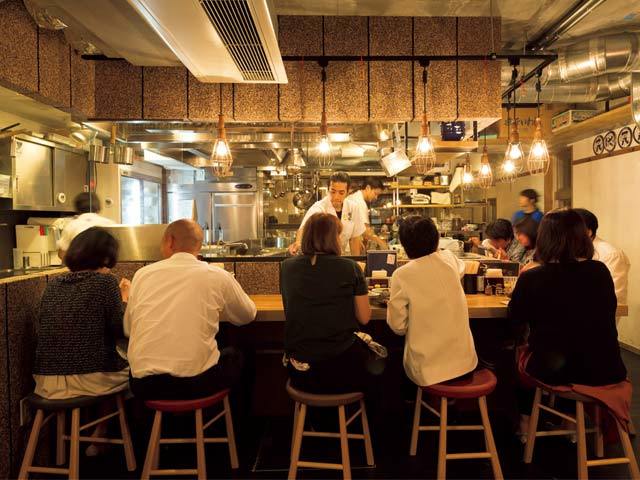 Today’s post is going to consider necessary functions for making the same brain as humans on computer.
I invited Mr. Yamada as a typical sample of human brain.

“I’m Mr. Yamada. What am I supposed to do today？”
“You just have to answer some questions, sir.”

“Lately the underage’s drinking has been discussed as one prime problem. So I will have you help with our on-site inspection at izakaya (a Japanese bar).（The underage in Japan refers to those under the age of 20. Japan has a law that prohibits drinking of alcohol by the underage.）

“There are four people who are drinking at a counter in izakaya. The seat No. 1 and 2 are away with their drinks at the seats.
No. 1 has a glass of beer and No. 2 has a glass of oolong tea.
No. 3 is a bald guy (65 years old) and No. 4 is a female high schooler (17 years old). And we don’t know what the two are drinking.
So, which numbers should you check to tell which one is an underage and drinking alcohol?

“That’s easy. All you need to find out is how old is the person who is drinking the glass of beer at No.1 and whether the female high schooler at No.4 is drinking alcohol or not.”

“Haha yeah well, I’ve been working in this sales field for more than 30 years.
I have the eyes for people watching.”

“The result turns out that the person sitting at No. 1 is a 32-year-old salary man and the person at No. 4 is drinking a glass of shochu mixed with hot water.”

“What!That female high schooler is drinking shochu mixed with hot water!
I can’t allow this!
She should have gotten a glass of cassis orange like a girl.”

“Nono, cassis orange is still alcohol.
Now, here’s the second question.
We have four cards.
Each has an alphabet on one side and a number on another.

“’When the alphabet on one side is a vowel, the other side must have an even number’
To check if such rule is indeed in effect, which cards should I turn over？”

“Huh, too complicated to understand what you are trying to say.”

“You’d think that.
However, this card problem and the problem at izakaya are in fact, mathematically the same problem”

“Yes, both problems ask whether options meet the combination of the two conditions A and B or not.
The first one is a combination of ’one who can drink alcohol（Ａ） must be over 20 years old（Ｂ）’, while
the other one presents as ’if there’s a vowel（Ａ）, it must be an even number（Ｂ）’.
Both problems essentially state that ’if the condition Ａ, it must be the condition Ｂ’.
By simply changing the content of the question, despite the same nature, the difficulty increases this much.”

“Mmm, the reason why I was able to answer the problem at izakaya is probably because I’m accustomed to it from my everyday life.
I don’t know anything about vowels or even numbers, concepts that I don’t use everyday.”

“Okay then, we will stop using vowels and even numbers and change it to something you are familiar with already.
Let’s say there is a rule that says ‘noodles must be cheaper than ＄15’.
Which ones in the following should I inspect in order to check they are in compliance with the rule？”

“Huh, I don’t even know with ramen, something I eat everyday anymore.
It doesn’t seem like I know because I’m familiar with it.”

“Let us move on to the final problem.
There’s a new law in place.
‘One can only go bald when one is over 55 years old.”

“There are four persons sitting at the counter of izakara.
The first one is clearly bald.
The second one has plenty of hair.
The third and the fourth ones are wearing hats so we don’t know for sure. But we know that the third one is 65 years old, and the fourth 35 years old.
In order to check if they are in compliance with the bald law, who should I inspect？”

“First of all, who breaks such an important law!
Well, we first need to check how old the bald one at No. 1 is.
Next, we also need to check whether the young one at No. 4 is bald or not.
This problem was easy.”

“Then I’ll go check” said Mr. Yamada and took off the hat from the guy at No. 4 from behind.

“Hey, what are you doing!
Please stop.”

“I knew you were bald！
You are 35 and that bald! You are sentenced to life.”

Now let’s go back to where we were.
This game was from a problem of a psychological experiment called ”The Wason four-card problem“.
Both are mathematically the same, yet how to condition a problem makes it easier or more difficult.

Today’s theme is brain-inspired computer.
I talked about The Wason four-card problem to demonstrate that our human brain and computer are essentially different.
If computer was faced with two mathematically-same problems, it would not be confused with them even the variants changed.
In this way, we can say that human brain is different from ＣＰＵ of computer.

In the next post, we are going to take a look at how our human brain calculate by looking at the Wason four-card problem.