How to construct a world inside your head from a sentence

In the last post, I talked about “words”. Today I’m going to talk about “sentences”.
What does it mean, to interpret a sentence?
It solely means, to convert the linguistical world which is made up of symbols to the virtual world inside your head.

This is because the word “school lunch” is associated with the image – bread and milk laid out on the desk.
This can also be expressed in the form of Has-a, as I explained in the post “How to Define the Meaning of Words“.
For example, let’s say we construct a ３DCG model of school lunch of bread, milk and dishes laid out on the desk. Then, we summon the ３DCG.
Hence, the symbol “school lunch （linguistical world） is converted to the virtual world inside your head.

Next, let’s think about “sentences”.
A “sentence” means, when, where, who, do what.
Now we need to construct it on the virtual world.
“When” and “where” come from “setting” like “time” and “place”.
“Who do what” comes from “happenings” that happen in the setting.
So, we can say that the virtual world inside our head is constituted of the “setting” and “happenings” that elaborate within the setting. 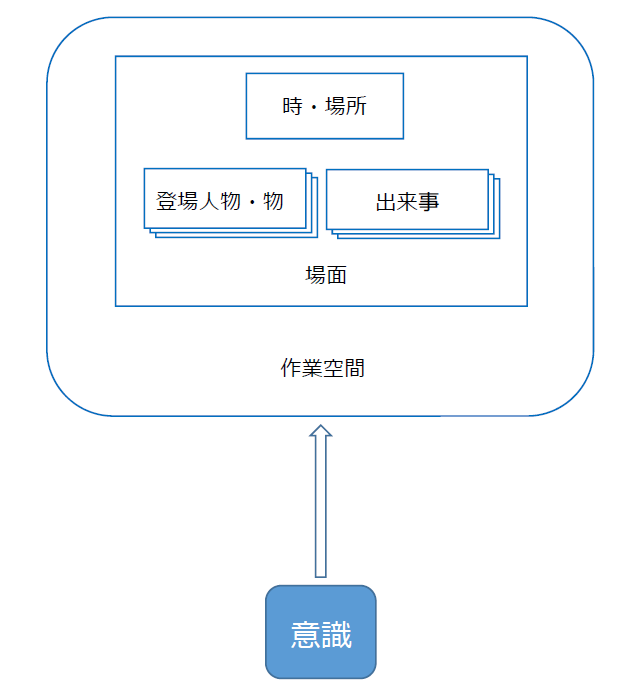 Now let me explain the process of setting generation using the story of “Momotaro”(a famous old tale in Japan) as an example.
First thing to be generated in the working space is the setting – “once upon a time, there was an old guy and an old lady living in some place.”.
Here the time is “once upon a time”, the place is “in some place” and the characters are “an old guy and an old lady”.

This is how consciousness generates settings into the working space and manages different stories by setting from reading sentences.
By storing a series of settings in long-term memory, they will be memorized as episodic memory（story memory）.
For example, when it searches by the keyword “Momotaro”, the first setting of the story will hit. Then it places the setting in the working space.

As consciousness is capable of identifying and managing settings in the working space, it can also recall such as “speaking of Momotaro, I remember the setting where an old guy and an old lady came in”.
When asked “what happens afterwards?”, it can summon the next setting in its working space and answer “the old guy went to the mountain for firewood gathering”.

To understand the meaning of a sentence is by reading a sentence, analyzing it by constructions, elaborating it by settings in the working space and finally, by creating a virtual world out of them.
To judge whether it understands the meaning fully, you can see whether it can answer questions as humans would do.
To be able to answer questions as humans do is to also say that, it processes information in the same way as humans think inside their head.
This is how it becomes capable of maintaining natural communication via conversation.