What is self? What’s Admirable About Being Able to See Yourself Objectively?

In the Case of No Consciousness

In the case of no consciousness refers to the settings I have introduced in the last post, a frog, line tracer and riding a bicycle.
Our brain observes data entered in sensory organs such as eyes all the time, and when a data of designated pattern is entered, the brain acts on apt for the situation.
From data input to output, it is systemized as a series of flow, and already-designated patterns are being carried out automatically.

For instance, in the case of a line tracer, it judges its trajectory merely based on four points.
Four sensors lined up in a line judge whether each point is white or black, and that is how it determines how far away it is located from the line. 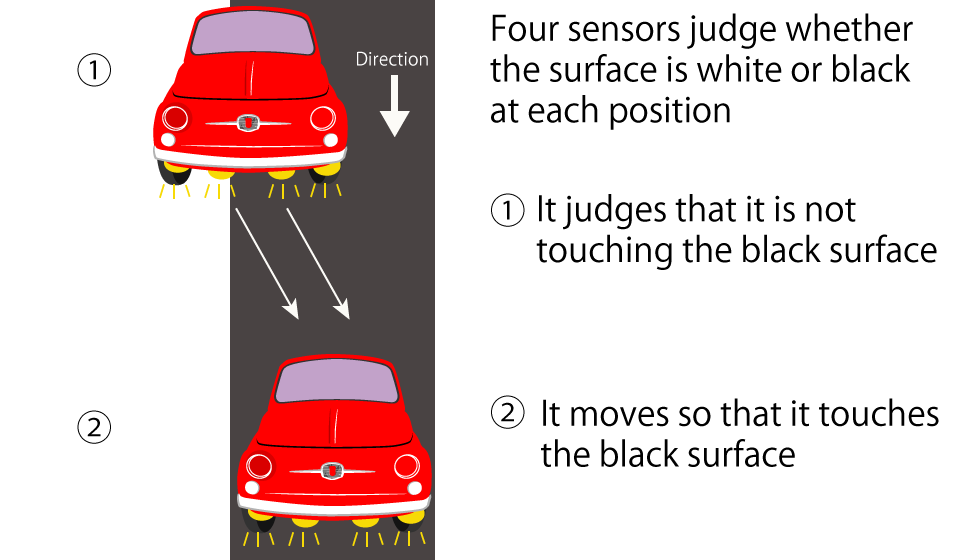 The world it is seeing is very simplified one as it only judges the situation in four black and white points.
For a line tracer, the world is merely four black-and-white points.
It’s the same in the case of a frog, too.
It judges bugs in front of its eyes from whether it is moving or not, hence the only indicator for it is the movement.

The problem with this unconsciousness model is that it can only respond to certain designated patterns.
In the case of a line tracer, one little trash on the path will derail its track.
In the case of a frog, it will eat any bug in front of it – it might die from eating toxic bugs.

This problem can be solved through evolution.
For instance, let’s say a yellow bug is toxic.
Frogs with the gene that doesn’t eat the yellow bugs survive, and their offspring will prosper.
This is how some species that have adapted and modified to the changes of the environment survive.

Yet, sometimes adaption takes tens of thousands of years.
Obviously, species which couldn’t adapt to their changing environment perish.
In our sense though, how well will our offspring prosper if we ourselves die, it won’t mean anything.
You have to be able to adapt to the environment around you.
That’s how Consciousness came about.

In the Case of Consciousness

With consciousness, you can debate “when do I want to eat this apple?”.
Or a thought like “can I eat this yellow bug? The last time I had it I felt uncomfortable, so I will avoid it”.

Therefore, you think first and it alters your action pattern later.
You don’t have to take tens of thousands of years to evolve; you can easily adapt to alterations by learning.

When it simply judges things in front of its eyes by its little movement, it doesn’t take colors into its consideration.
It doesn’t know whether color is important, or shape or anything else.
It shouldn’t just rely on the little movement to make a judgement. 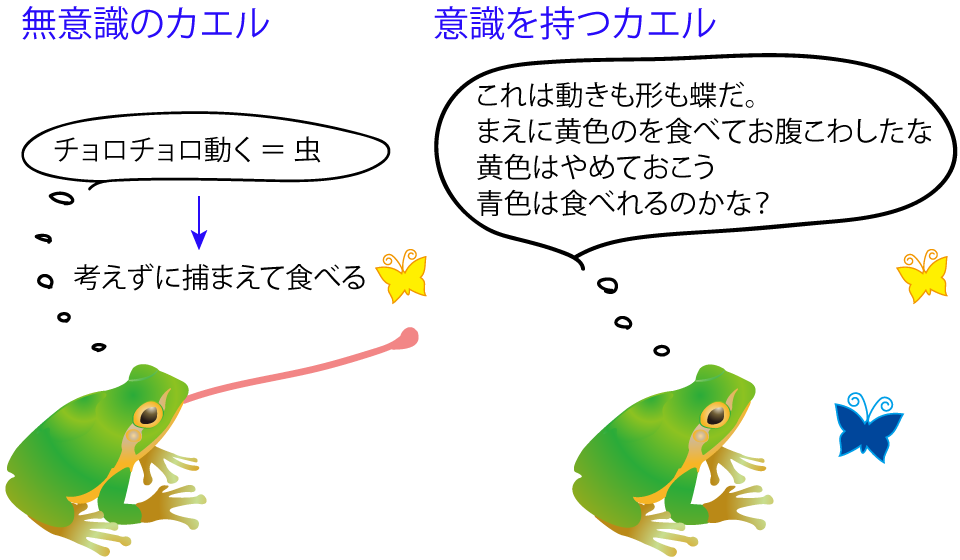 Then how do we identify the world, as it is?
Can I simply film the environment around me on a CCD camera and project it?

This is called homunculus inside head and famous for being the paradox in the artificial intelligence.
As long as you employ homunculus, you can’t solve anything.

Then, how can we identify the world without employing homunculus?
First, let me explain the ways we feel the world from looking at he visual processing inside our brain. 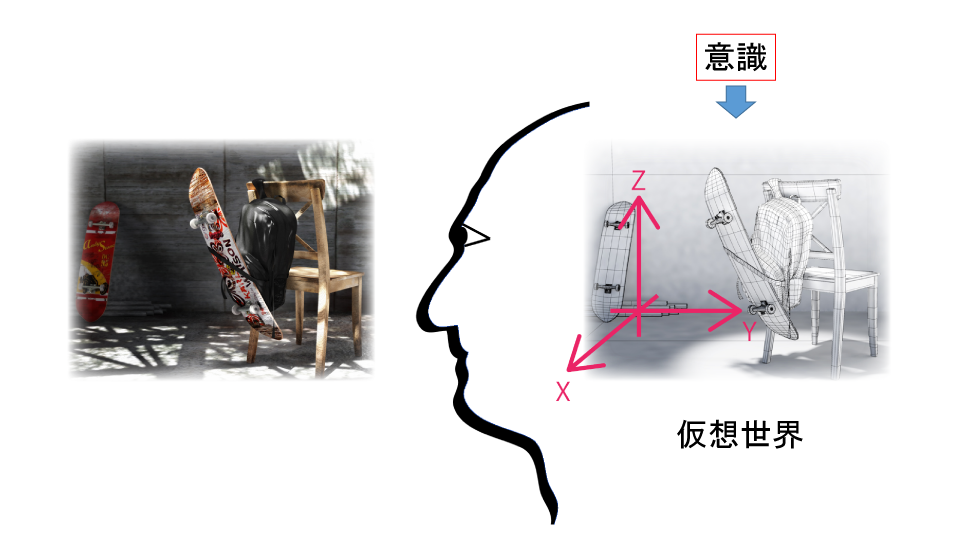 We look at the world with two eyes, but we don’t see it two-fold.
This too tells us that we don’t simply project the moments we captured with our eyes onto the screen inside our brain.
The reason why we have two eyes is to see things sterically using the parallax effect.
This is how we identify the world as a three-dimensional space with depth.

Inside our brain, we integrate two types of image we captured with our eyes and process them so our consciousness can understand the world in three-dimension.
Other than sense of seeing, data from sense of hearing and sense of smell are integrated as well so that by re-structuring the world in our brain, we can identify the world as it is.

We like to believe that we feel the real world through our eyes and ears, when in fact, what our consciousness directly receives is a virtual world created by our brain. 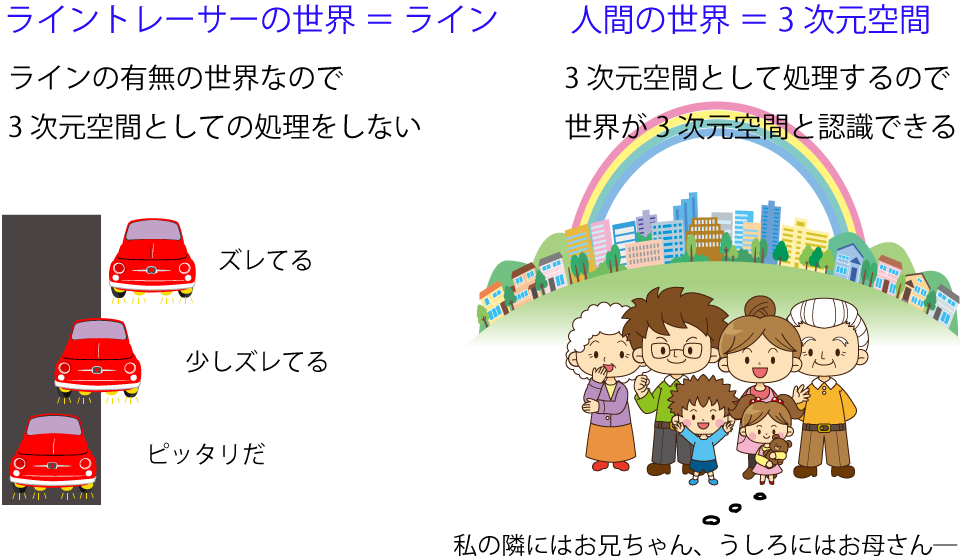 We take this for granted as we continue to live in this three-dimensional space.
Nonetheless, this is something that can only be felt with consciousness.

Let’s go back to the example of a line tracer.
For a line tracer, the world is all about on and off of four sensors.
What a line tracer feels, is which sensor is on and off.
It doesn’t even have a concept that the world “ is made up of lines drawn in a white piece of paper”.
This is because it lacks the ability to imagine what kind of world it is running on merely from on or off status of sensors.

It will be the same even installing a CCD camera of 10 million pixels instead of four sensors.
Just having high-end sensors doesn’t automatically allow line tracers to be able to comprehend that, the world is three-dimensional and that it runs on the lines drawn on the surface.

What we see is a virtual world created by our brain.
In short, a fantasy.
Hence, we cannot conclude that the reality is the same world that we are seeing and seeing.
It is how line tracers conclude that the world is all about on and off of four sensors.

But, somewhere in the process of evolution, we have certainly decided that we identify the world as it is.
If that is the case, perhaps the world we are seeing is the actual world.

The important thing here is not that, whether the world we are seeing is the same as the actual world.
What ROBOmind-Project attempts to do is to create AI that can communicate with humans naturally.
The important thing here is that, whether the world AI is feeling is the same world that humans are feeling.
If we are feeling the same world, then it makes our communication possible.
This is what I have explained in the “Turing Test” post: in order to be able to communicate with humans, one has to share the same world with them. 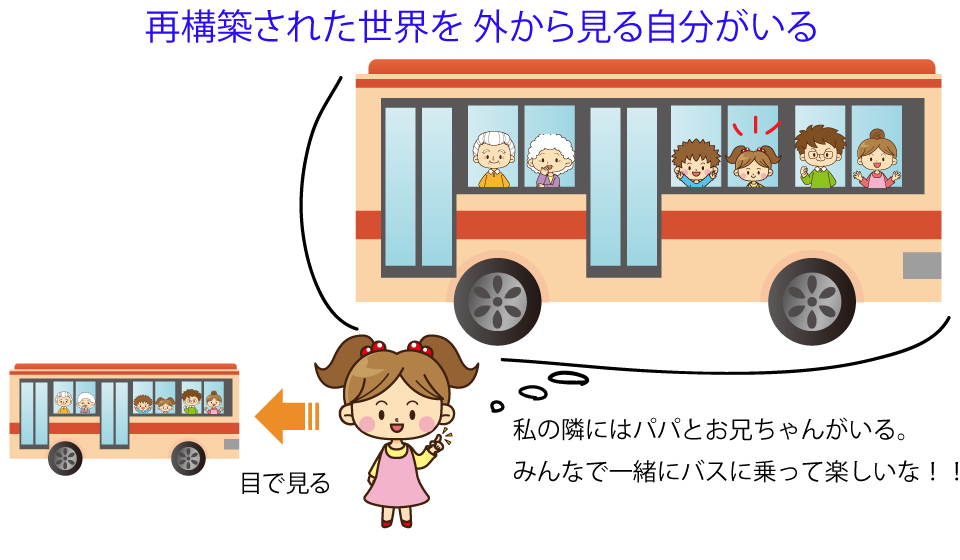 Our consciousness feels the world which includes self, as well as self seeing the world from outside.
This can be a standpoint of others looking at self.
This is how we acquired the perspective of seeing oneself objectively.
Being able to see yourself objectively allows you to imagine that others, too, go through what you feel just the same.
You start to understand what others think, what others are suffering from gradually.

As I have explained in “Cognitive Patterns”, once you understand not just your pleasure / displeasure but others’, you finally acquire the cognitive patterns such as sense of right and wrong and ethics which can only be possessed by human beings.

To reconstruct the world inside your head.
Consciousness that sees the reconstructed world.
This is the essence of human mind, and the absolute necessity for AI to be able to have a natural conversation with human beings.

R & D blog
What Is consciousn... arrow_backPrev Nextarrow_forward What Does It Mean?...