The System Overall Structure and the Method for Semantic Understanding

In this post, I am going to briefly go over the overview of the ROBOmind System.
ROBOmind System will probably be chat bots which can converse with humans.
What will be input is natural language (spoken by humans).

As they are chat bots, they do not have cameras or robot hands like humanoids have – the only connection with the external world is interaction in natural language.
The conventional chat bots are systematized as scenario based.
They are also known as artificial no brainers.
They don’t understand the meaning of conversations. Once they detect certain words, they would run the corresponding scenario – their responses were usually not on-point and they were never able to hold a conversation.

On the contrary, the ROBOmind System has the same mind as humans’ and understands what others are trying to say or the context of the conversation.
That’s how it can hold a natural conversation and heartfelt communication.
Communication is all about telling the others what you have pictured inside the head in words; and in return, the other will understand the words and rebuild them in their head, and understand what the other is trying to say.

For example, imagine a situation where a child says to the mother “I had a pudding
in my school lunch today!”.
The mother imagines the scenario inside her head and recalls the child’s favorite pudding, and replies “that’s awesome” implying the empathy for the joy.
The child is content that his own happiness is translated to the the mother too.
This is all about semantic understanding and having one’s feelings understood by others. 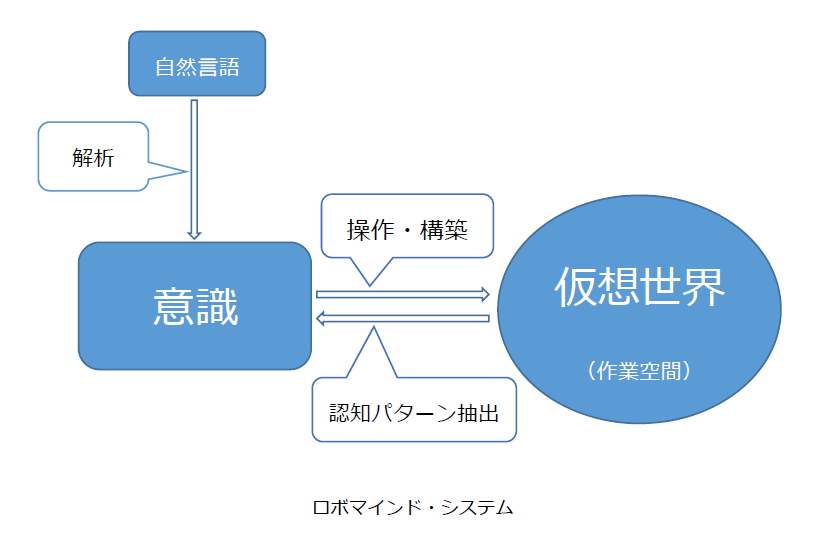 Humans think while picturing thoughts inside the head.
Working space is where we think inside our head.
In Working space, we can place anything we can think of – anything in the real world or anything imaginary. We can freely maneuver with our consciousness.
For detailed explanation, please refer to “Working space” in “What Does It Mean? : To Identify A Three-Dimensional Space”.

Syntactic analysis categorizes a sentence into “who” “when” “where” and “what”.
Once it knows it, it can easily build or maneuver the virtual world as the sentence is structured.
And, once it maneuvers it, it judges which cognitive pattern it will fit. Once it finds out the fitting pattern, it judges that this is what the others are trying to say, and respond accordingly.

In the case of “a child getting a pudding”, because this child loves puddings, as he gets one it shall be judged to be categorized as a “happy” cognitive pattern.
Now that it figures out the other person’s “happy” emotion, it should just respond “that’s awesome” to let the other know that it knows their feelings.

Semantic analysis is about building or maneuvering virtual worlds and extracting cognitive patterns.
This is the semantic understanding of sentences in our system.

Let me explain a little bit more about syntactic analysis.
A sentence is comprised of a subject, predicates, and objects.
In syntactic analysis, it will categorize the words analyzed by morphological analysis into these categories.

These meanings are written by the exclusive script language, ROBOmind language.
After syntactic analysis, consciousness extracts the meaning of the verb and maneuvers the virtual world literally.

What would you feel if the person you are talking to said “there is”.
You’d think “what is there?”.
Hence the word “there is” needs an object.
If the object is unknown, it cannot interpret the meaning of the sentence; consciousness will not be able to maneuver the virtual world.

So, after syntactic analysis, it checks whether the sentence is capable of maneuvering the virtual world. If it cannot, it will give it off as an error.
After consciousness receives the error, it will check the content and asks questions if necessary such as “what is there?”.
This is how sentences without errors get to proceed to the next phase, and consciousness maneuvers the virtual world flawlessly.

It is normal to ask again for sentences that cannot be comprehended in our human conversation.
As we think of it as communication protocol, once it detects an error, it requests a re-send to the sender.

This is how a heartfelt communication is made up.

R & D blog
How to Create Cons... arrow_backPrev Nextarrow_forward How to Define the ...