The Impossible Limit of Deep Learning

What deep learning can and cannot do

Amongst the ＡＩ hype, people continue to believe that deep learning can do anything better than us humans. However, we need to be aware that deep learning has its limit and cannot exceed human’s abilities.
Which is, language comprehension （natural language processing）.
Now, let me explain where lies the limit of deep learning and how we can make ＡＩunderstand human language in this chapter.

First let’s briefly go back again to the basic concept of deep learning using the example of hand-written numbers recognition as a reference.
Features of hand-written numbers are: overall round or straight lined, partially round or with several circles, a complete circle or an incomplete circle.
To identify numbers, we use these feature values as a judgement point.
When you enter a image to identify, it will make a judgement on small feature values such as whether the image has any circle, if so how many circles, and whether the circles are in complete form. Later, it will make a judgement on bigger features and finally, on the overall figure of the image.
Deep learning is made up of multi-layered neural network, so in each layer it makes a judgement on feature values. 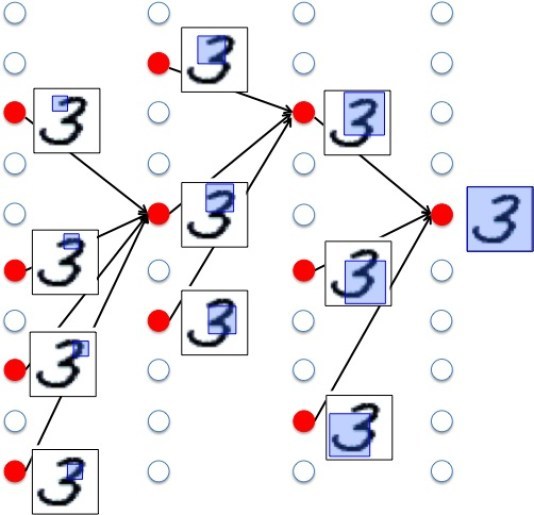 When we look at the famous study of the Google successfully obtaining the concept of a cat.
In this study, they input ten million images from Youtube as data set for learning. As a result, it became capable of identifying cats.
An impressive part of the study is that, despite having not input any correct image of cats, it became capable of identify cats.
By inputting tons of images, it learned to identify “cats” on its own.
The reason behind choosing “cats” as the focus of the study is because the most posted type of videos on YouTube was those of cats, and if it became capable identifying cats after the study, it would learn to identify human faces as well.

When we look at the feature values extracted by the system, we notice that the parts to be identified in the first step were the angle of lines, circles and squares – those in details. Then eventually the focus moved to the shape of eyes and ears, and in the final step, it identified face – overall figure of the image.
This is very similar to how humans identify objects.
It is very convincing how the system obtained the concept by self-learning.

From the findings of the Google study, it was revealed that if we let deep learning learn from tons of data, it will become capable of identifying objects like we humans do.
So that’s how people started to believe that if we input tons of document data into deep learning, it will obtain concepts on its own, and in the near future it will develop a cognitive mind like human’s.
However, this did not happen in reality.
Then, why couldn’t we develop the same kind of mind as human’s by letting deep learning study tons of data?

Let us look from another perspective.
The original data from YouTube would have back figures of cats, so it should have extracted the features of a back of a cat.
Hence, it obtained two concepts – a cat from the front and a cat from the back.
Then, does the system identify that they are in fact the same cat – just seen from different angles?

In fact, it does not identify that way.

Because the images given to the system were only two-dimensional.
To be able to make a judgement whether the image match feature values, it rotates it, moves it parallel and zooms in and out – however, this is all done on the basis of two-dimensional images.
It can be said that the system does not comprehend a concept as three-dimension.
It does not comprehend that three-dimensional objects look different when seen from a different angle.

If objects were hand-written or originally two-dimensional, a problem like this would not happen.
Then, will deep learning able to identify from a two-dimensional picture the original object in three-dimensional form？

Is this the limit of deep learning？
In conclusion, it is not impossible.
（Although it is yet to be actualized. ）

Then, what sort of function does the model of human mind have?

This is the model of human mind.

Next, we will be looking at the most crucial emotions.

In order to identify emotions, it needs to go through a procedure where it matches who did what impact (pleasure or displeasure) to whom.
The capability to control these indicates that it understands the model of human mind.
This is how it can identify whether the other person is happy or upset in a conversation.

You can’t make AI to comprehend human words by controlling the dimension of language.
What needs to be done at the foremost importance is to create the model of human mind.
Nonetheless, the current hype around ＡＩ only concentrates on deep learning.

ROBOmind-Project is one of the few projects that attempt to create the model of human mind.