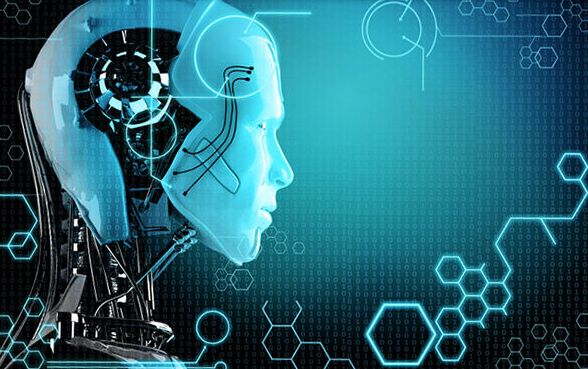 Now based on the definition of a system of mind, I would like to determine whether the following systems possess consciousness.
First, let’s think of the most simple system, ”thermostat”.
A thermostat turns on / off according to a change of the temperature, a very simple system.
As thermostat possesses the function to perceive the external world（the temperature）, it passes the condition ①.
However, it does not possess anything besides ① so we cannot say that thermostat has consciousness.
Which sounds obvious.

Next, let’s think of “dogs”.
Dogs have eyes and ears to perceive the external world, it passes ①.
But, we cannot say they have what ② requires – the virtual world.
The reason is explained in the post ”What Does It Mean? : To Identify A Three-Dimensional Space” so I’ll briefly introduce it below. 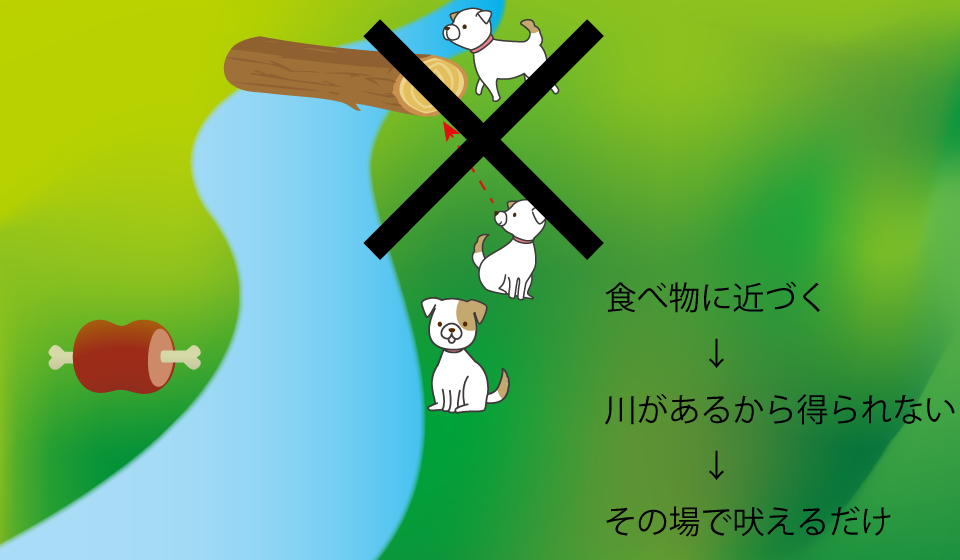 This is because, to picture a scenario to cross the bridge, one needs to have a map inside their head.
This is the reconstruction of the real world inside one’s head, a virtual world.
One can freely control what is on the virtual world inside their head, so it can picture the scenario to obtain the meat by crossing the river despite the detour.
However, dogs are only programmed to get closer if they see food, they cannot picture a way to cross the bridge in the first place.
This program ”to get closer to food if one sees it” is the perfect example of direct perceptions of the real world.

The next example is a shogi (Japanese chess) playing robot.
A shogi playing robot has a camera to film the board, a brain to come up with the next move, and a robot arm to move pieces according to the next move. 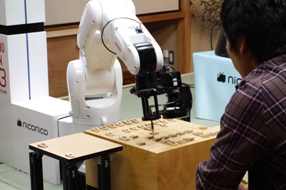 A shogi playing robot recognizes the shogi board, which is the real world, so it passes ①.

The brain of a shogi playing robot comes up with the next move after having thought through some moves ahead.
This can be done because it goes through different scenarios on the virtual board beforehand.
So it can be said that it possess a virtual world, which is a re-constructed version of the actual board in real life by computer.
Then, it passes ②.

While the brain of a shogi playing robot comes up with the next move from the current board, the board inside the brain is not the image taken with its camera; it is a board that is placed in a virtual board by extracting pieces from images.
Hence, what a shogi playing robot perceives is not the real world itself, but a virtual board that has been re-constructed from the real world.
From this, it also passes ③.

In addition, as it simulates on the virtual board, controlling pieces, it passes ④.
A shogi playing robot can play against one, it can also play against a human being with the knowledge of the rules of shogi.
To play in a game indicates the ability of communication through the board in the real world, it passes ⑤.

In a game, it shares not only the rules of shogi, but also the winning patterns and strategic patterns with the opponent.
This is how it reads what the other’s thinking from the other’s moves.
This can be seen as communicating through each other’s cognitive patterns – so it passes ⑥.

From the above facts, surprisingly, a shogi playing robot is qualified to possess consciousness.
What a surprising result.

However, the real world we humans live in is much more complicated than that.
There are diverse range of stuff and people.
Not to mention complex relationships between people that are invisible.
To re-construct this sort of the real world is almost impossible.

But, that does not mean the virtual world is incapable of replicating the real world precisely.
Our purpose is to create a system which can have a natural conversation with humans.
In short, as long as it can understand what the other is trying to say, it will not respond some nonsense; it can hold a meaningful conversation with the other party.
Current chatbots are incapable of doing this and that’s why they can’t hold a proper conversation.

What the other is trying to say are converted into cognitive patterns.

As long as we can make this happen, we can actualize a system that can have a natural conversation with humans.
The next aim for ＡＩ after deep learning is clear.
To model the real world by mainly using cognitive patterns.