Now you, too, can have out-of-body experience.

How do you guys have an out-of-body experience？
（What are you taking about!）
（Well, not many people can do it, you know）

I always have it Egyptian style.
（What other styles are there!）

During my junior school years, out-of-body experience became trending.
When I say trending, only among several of my friends.

“There’s a way to disconnect your consciousness from your physical body and to fly to anywhere”
My friend Yuji told me that “consciousness that is disconnected from the body is called etheric consciousness, and this phenomenon is called out-of-body experience”.

“Wow！ So you can look down on the city and fly to wherever you want？”
“Yep, not only in Japan, you know. Once you picture where you want to go, you can go there in an instance”
“Wow, awesome！ Teach me how to do it！”

“Well, I suppose for the beginner like you, the Egyptian style is the best”
“I don’t care which style, just teach me how！”
“Alright, here it goes”
“First, lay on your back. Then, imagine that there’s an pyramid floating above your body”
“If you managed to picture it, scream ‘Pharaoh！’ in your mind, then you’d find your etheric consciousness out of the body”
“That’s it? Sounds easier than expected”
“OK I’ll try it tonight when I go to sleep”
“Go ahead. If you successfully got out of the body, let’s meet at this classroom at midnight!”

So we promised, but nobody managed to have an out-of-body experience on that day.
Yuji, who taught me how, had never been able to have one.

Then came one night.
I fell asleep as usual, and woke up suddenly in the middle of the night.
I woke up, but it didn’t feel right.
Though my consciousness was clear, it felt as though I woke up to my dream.

It was the state where in your dream you realize you are dreaming.
I only came to know this later, this phenomenon is called lucid dream.
At the moment I thought: ”if this is a dream I generated, maybe I can do whatever I want”.

So I remembered out-of-body experience.
I thought “maybe I can do it now” and screamed ”Pharaoh！” in my mind like I would always do.

Then, I felt the sensation that my ankles were slowly being lifted.
But my physical ankles stayed as they were, not moved an inch.
What was being lifted were my ankles in etheric consciousness.

“Hey, it’s going well”
I thought and tried to go out more. I found my legs, bottom and chest in etheric consciousness were being lifted respectively.

Instantly, my out-of-body experience that had been going well stopped at my neck.
Etheric consciousness is connected to the physical body by the head, and it stopped by the neck – like the rest was out of my body in a 30 degree angle. 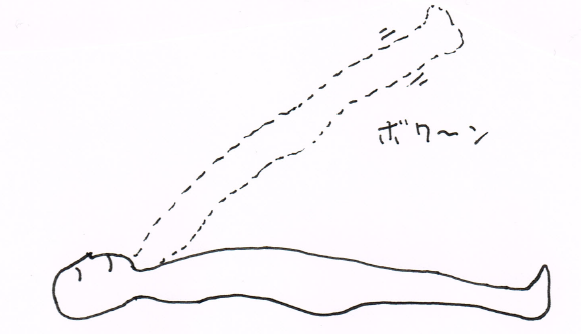 “Oh no. I was thinking some stupid thing. I have only a little more to complete this out-of-body experience！”
So I was freaking out.
No matter how freaked out I was, I wasn’t able to get my head out of the body.
But I did certainly feel etheric consciousness.
I did not feel anything in my physical body, but I was able to freely move my etheric body.

Then an idea came up to me.
“Wait, what if I build a momentum to get it out of my body?”

So instead of doing it slowly, I should build a momentum in the process and let it out fast.
Precisely, I would bend my knees and just like flexion, I will flex my knees at once and let etheric consciousness out to the direction of my feet.

As I tried this idea, although it was just by a bit, I felt that I was able to let it out by the tip of chin.
“Hey, maybe this idea works！”
I thought, and I tried it again and again.

Then, I heard something outside of my room.
It seemed like my father woke up to go to the toilet.

“This is awful！” I was panicking.
What if he sees me.
What if my father sees this, what would he think of it, I was scared.

Like he would wake up in the middle of the night to go to the toilet and peek in his son’s room. You’d expect him to be fast asleep; but only to find your son’s body half transparent, floating with his neck in a diagonal angle.

And when he looked closer, he saw that the semi-transparent body was desperately flexing and stretching in the air.

My father had been working as a civil servant for many decades.
（He was a serious man with the hobbies of climbing mountains and reading）

If such a guy saw his sleeping son in semi-transparent and trying to get out of the body…
People would think he got crazy.

“What is going on, my son・・・”
“Um, I was stretching in the middle of the night, in the air, semi-transparent！”

“Dad, please c’mon keep it together”
“Daaad！”
My mother would have been shocked to hear it.

I didn’t want to disappoint my parents anymore.

In that moment,
I felt my etheric consciousness that was trying to get out come into my physical body.

My father, without noticing his own son almost having an out-of-body experience by his side, left to the toilet.

Later years, my father managed to complete his work as a civil servant until the retirement age.

This is my story of almost having had an out-of-body experience.
I was initially intending to write a hook for the topic of qualia, but I ended up getting too pumped about it.
（It was after all, a hook story）

So I will write about qualia in the next post.
（What, is that it?）