HOME > Unsolved problems of AI/Philosophy of a mind > The Symbol Grounding Problem Has Been Solved : Part 1

The Symbol Grounding Problem Has Been Solved : Part 1

The symbol grounding problem is the problem of how symbols (character string, words etc) can be linked to their meanings.

The symbol grounding problem only occurs in the kind of processing system which internally replaces objects in the external world into symbols.
Hence, robots like line tracers which directly react to signals from sensors do not have the symbol grounding problem.
A line tracer is a micro-computer robot that runs on the line drawn on a piece of paper （Reference：”Subjectivity and Objectivity”）. 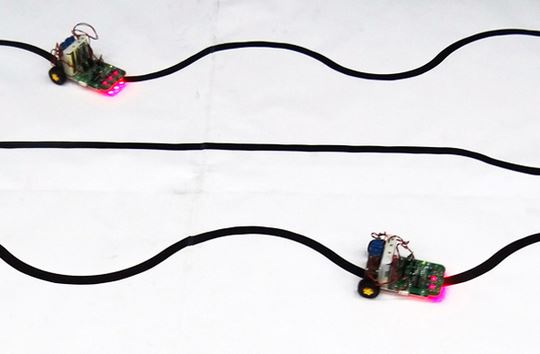 We humans name things that exist in the external world.
Words with names are, in a sense, symbols.
When you call the name, you can picture the thing and control it in your head.
This is symbol processing.
A phenomenon in which things in the external world and symbols inside do not link up, this is the symbol grounding problem.

Let me explain a little bit in depth.
Just like humans, AＩ manages things that exist in the external world in words in its internal system.
As I explained in “How to Define the Meaning of Words”, in ROBOmind-Project, words are managed by “concepts” and ”Has-a” relationships.
The relationship of “Has-a” is a relationship of what possesses what.

To have these easy conversations, AI needs to register a huge amount of data.
In order for it to hold a natural conversation with a person, it would need to have an almost infinite amount of database.
Recently ＡＩ has become capable of various things humans are capable – from image recognition to driving automobile―, this is the reason why it is still incapable of simple daily conversations.

ROBOmind-Project faced the same problem.
We humans do not memorize a description like ”there’s the ceiling above the corridor which is outside the door”.
Then, how do we identify what we see?

So how can we actualize this on computer?
We can actualize this by creating a ３ＤＣＧ model of the house.
Instead of utilizing database, we’d create a ３Ｄ model that is identical to the actual thing. 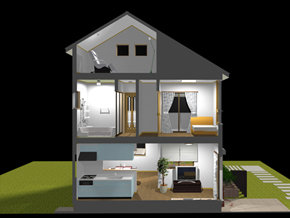 This is a 3D model – so you can see not only the external appearance of the house, you can also see “corridor” and ”rooms” inside.
When you go into a “room”, you’d see “floor”, ”ceiling” and ”wall”. On the ”wall”, there’s ”windows” and you can see outside from the ”windows”.
If you have this kind of ３Ｄdata, you can answer to a question like ”what can you see from the window?”.
Therefore, by using 3D models rather than database, we can solve the symbol grounding problem.

The reason why the symbol grounding problem occurs is that we forcibly tried to manage the reality in the form of ”database”, which is completely different from what we picture in our head.

Why did we try to make it understand from a different way we humans use?
That’s because it is so easy to handle database.
In the world of computer, it is a must to use database to manage data.
That’s the sole reason behind this.

Yet, even if we know the cause of the problem, it wasn’t easily solvable.
I, too, once tried to identify the three-dimensional reality properly by using database only.

I continued to use database because of the program development environment.
A general program that uses database and a program like 3D model are completely different things.
I knew that there was such thing as ３Ｄ physical simulation existed, but it was mainly used for games and never for general business use that handles documents.

This is how we can simulate what we do in our head on computer.
Thanks to this process, at last, we started to see the goal towards solving the symbol grounding problem.

In other words, the symbol grounding problem is only solvable today thanks to the stabilization of 3D game development environment.
It must have been technically challenging to do the same thing with the same concept in the 1960s during the first wave of AI or in the 80s, during the 2nd wave of AI.

Not limited to physically existing objects, concepts such as ”emotions” could be comprehended without the symbol grounding problem’s occurrence, provided that computer builds the same models in human’s head and controls them.
This processing of extracting emotions is what acts as the core part of ROBOmind-Project, and this can be relatively easily actualized by using database.
The most difficult part of daily conversation is in fact not the extraction of emotions; rather, it is to comprehend the meaning of sentences in the first place.

For instance,
let’s consider the meaning comprehension of the sentence below:
“last night, when I peeked outside from the window, I saw a shooting star ”.

As long as “shooting star” is registered as something like “rare” “beautiful” and ”positive” in database, one should just answer “that’s great” “was it beautiful?” and one could hold a natural conversation.

What about the meaning of ”when I peeked outside from the window”?
There is nothing in particular to note, right?

Then, what about this sentence?
“yesterday, when I looked up at the ceiling from the floor, I saw a shooting star”.

The comprehension of the three-dimensional space is something we humans process every day.
This is the essence of the symbol grounding problem.

In the next post, ”The Symbol Grounding Problem Has Been Solved : Part 2”, I will explain about how the symbol grounding problem goes about solving “the Zebra Problem” which was initially proposed.