HOME > Layout of a mind > What is one’s memory? What are memories?

What is one’s memory? What are memories?

“I” can only be “myself” thanks to episode memories. 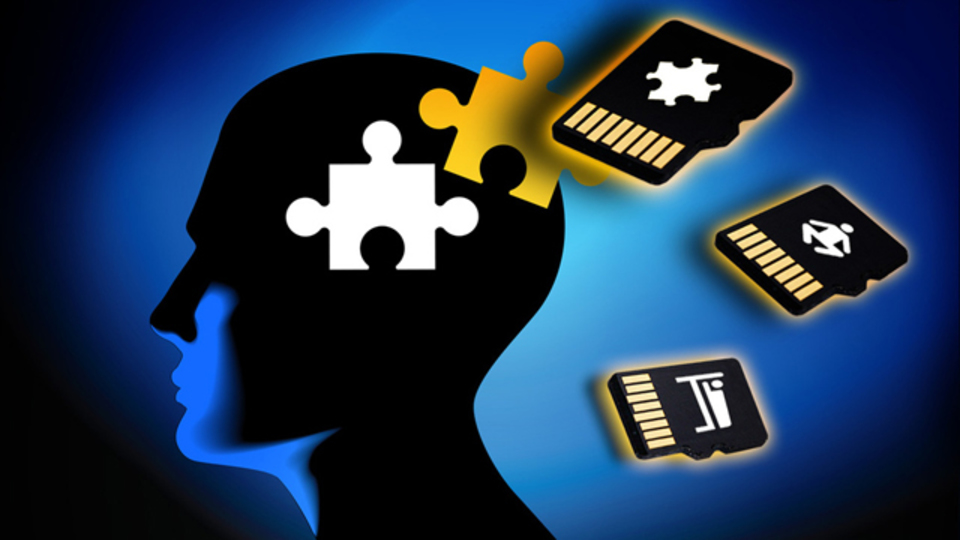 Something impressive tend to remain in one’s memories.
Something that is impressive means you have payed attention to that phenomenon.
By paying attention to something, this phenomenon will be allocated to its maneuvering space as an object.
About “maneuvering space” and “object”, please refer to the last post “What Does It Mean? : To Identify A Three-Dimensional Space”.

For example, there is an apple on the desk and you think to yourself “wow, there is an apple!”.
The fact that you reacted to it “wow” – might to do with you assuming that the apple was already gone as you ate yesterday, or you not usually placing apples on that desk. Regardless of the background reason, the reaction “wow” compels the scene being allocated to the maneuvering space.
This is the act of “paying attention”.

The scene you payed attention to was the scene in which an apple placed on the desk, a situation in which the object of apple being allocated on top of the object of desk.
If a pencil was placed next to the apple and you thought to yourself, “hey, there is a pencil too”, the pencil would too, be allocated to the maneuvering space.
And when you remember the scene, you will remember the pencil simultaneously.
If you didn’t think about anything, the pencil would not be allocated to the maneuvering space – the existence of the pencil itself would have been forgotten. 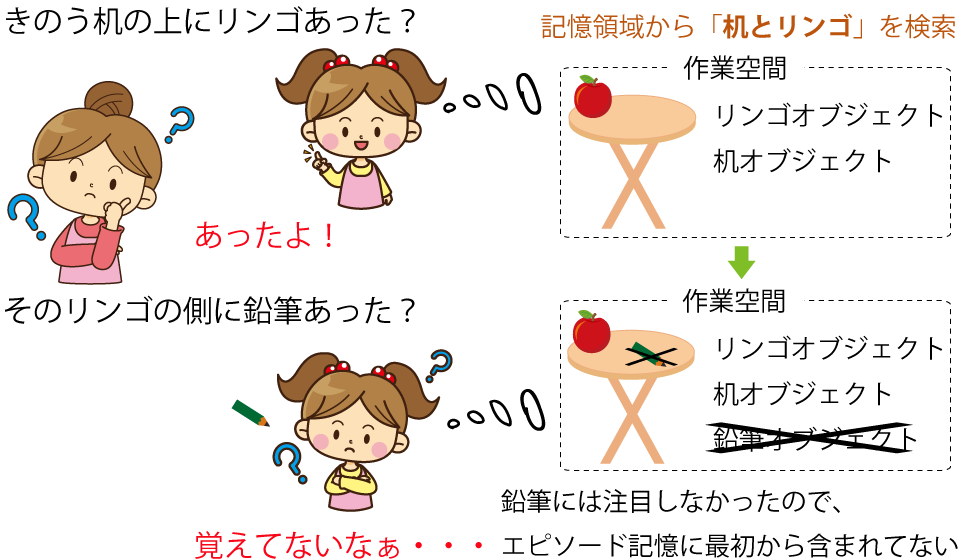 Inside episodic memory are recollected episodes and situations, it doesn’t necessarily recollect the very scenes you saw on the very moment.
For example, please recall “the classroom back in your primary school”.
Didn’t you just recall a classroom looked from above?

To think about it, this is peculiar.
It is because there is no experience of viewing the classroom from such a viewpoint.
This happens as your brain tried to remember what the classroom looked like, it adjusted the perspective so that you can see the whole view.
Being able to change the perspective is due to the fact that you have data of three-dimensional objects of the classroom and the desk.
In your maneuvering space, a 3D classroom is being elaborated.

There is another type of memory called semantic memory.
Semantic memory refers to rather dictionary-like memories like “apple is round and red” – it is some specific memory and such that is not associated with any episode. 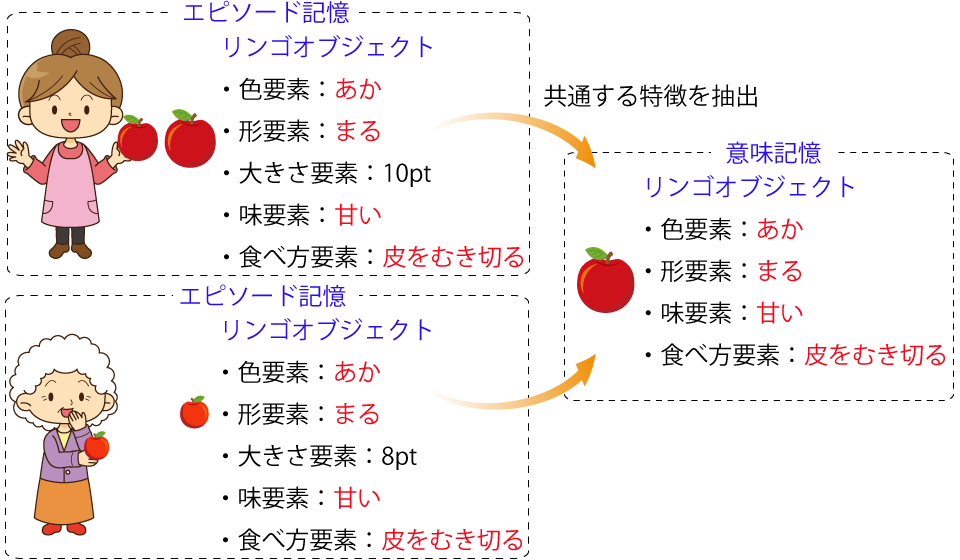 Although each apple has a different size and color, its features of being round and red are pretty much the same.
By extracting these common features, you associate features of “round” and “red” to the word “apple”; and this is how you remember it.
This is semantic memory.
In semantic memory, specific episode are deleted, and only factual data is stored.

Here we can see the important function of our mind.
Our mind extracts common features from multiple episodic memory and put it into semantic memory.

In addition, another important function it has is that semantic memory can be summarized as objects.
When it allocates “an apple” into maneuvering space, it will be allocated as an object.
The object of an apple has data such as being round and being red, these becomes a semantic memory.
The object of an apple has other various data about apple – sweet, delicious, has peels, and you need to peel it to eat it.

That’s why just by looking at an apple, you can imagine in your head “it looks delicious” or “let’s cut it into eight pieces and eat them”.
Things you can’t know from appearance can be judged from data inside semantic memory.
By identifying something as an object, not as it is, you are in fact recollecting many kinds of information simultaneously.

So I mentioned that we extract features from different episodic memory and generate one semantic memory, but when do we do this?

This is only my hypothesis, but I believe we do this during our sleep. 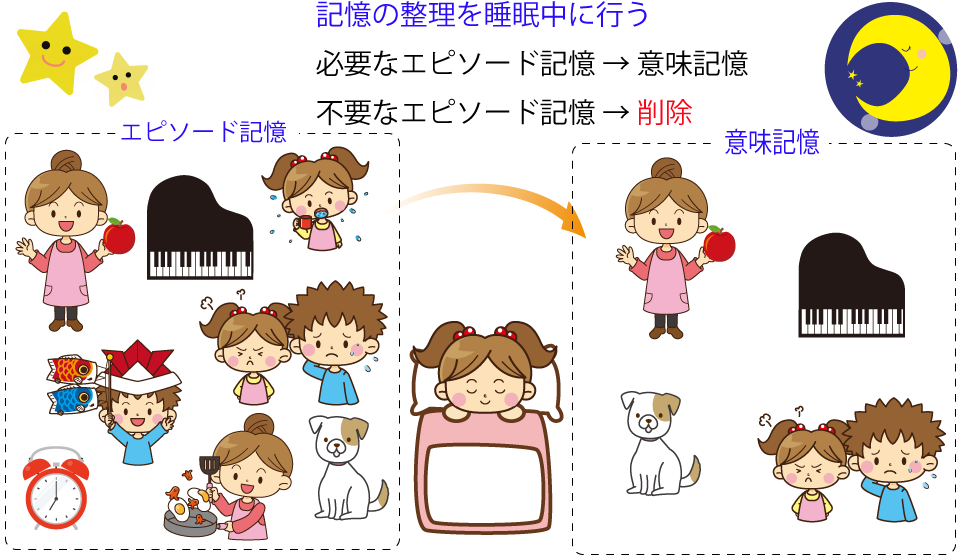 When we are awake, we recollect episodic memory as we pay attention to something or think of something.
I’m talking about a tremendous amount of memories.
As our storage area is limited, we can’t store every single thing.
As we rearrange them into semantic memories, unnecessary episodic memory are erased.
This is what we do during sleep.

During sleep, we sometimes see dream – which tend to be about what happened during the day, or about something we are constantly thinking about.
During sleep when we rearrange episodic memory in order, right before we fall into deep sleep the moment our consciousness touches upon the episodic memory, we see dreams.

Batch processing usually involves heavy processing and cannot be done while engaging with other tasks, hence it is done during sleep.
In my opinion, humans sleep every night to rearrange the incidents during the day.
The reason why humans need sleep is in fact not revealed yet – so I personally think this is the reason behind it.

R & D blog
What Does It Mean?... arrow_backPrev Nextarrow_forward Time does not exis...