Would A Neurological Zombie Dream About Qualia？：Part 1

A zombie man allegedly does not feel anything. 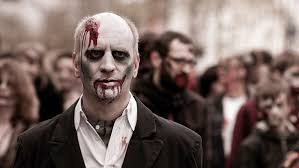 I will first explain it using the Wikipedia page.

*Behavioral Zombie
A zombie that is indistinguishable from a human if observed its external behavior.
There’s a connotation that if dissected, there might be some potential to tell it apart from a human.

A “neurological zombie” was proposed for a thought experiment in critiques of Physicalism.
Physicalism is a school of thought in which everything in the world can be explained by physical laws.

Here are the critiques of Physicalism incorporating the idea of “neurological zombie”.

These are critiques of Physicalism incorporating the idea of ”neurological zombie”.
Then, how should we explain things cannot be explained by physical laws such as mind and consciousness？
Do we need to employ concepts like spirit and soul, as science cannot explain them?

This is the today’s theme.

The 20th century science started off with quantum mechanics and the theory of relativity – this was an era of physical science.
From the end of the ２０th century, neuroscience has evolved exponentially. Now the ２１st century is said to be the era where mind and consciousness will be dealt with which physics cannot handle.
How will we able to deal with mind and consciousness that are not explainable by physical laws?

Every day we worry ”I wonder if the next job will work out”, we regret ”I didn’t do great at yesterday’s work”; we think about a lot of things.
The majority of what we are interested in are expressed in such emotions.
However, issues like worries and regrets cannot be solved by physical formula.

What constitutes a virtual world is qualia.
What consciousness is capable of identifying is qualia.
Consciousness can only identify the world by the unit of qualia.

As I explained in the post “Qualia Experience and My Story of Out-of-Body Experience：Part 2”, the qualia ”face” is composed of qualia such as eyes and nose, and qualia of eyes and nose are composed of the primitive qualia such as circle, triangle and line.
Consciousness pays attention to the eyes of a face and the roundness of eye balls, which demonstrates that it can only focus on qualia of eyes and circle.
This is what I mean by consciousness can only identify things by the unit of qualia.

Now Physicalists argue that as every single existing thing in the world is influenced by physical laws, anything can be explained by them.
How would ROBOmind-Project respond to that？

The world of mind functions by emotions.
If you receive something meaningful, you feel ”happy”.
If you receive something valuable from someone, you feel ”gratitude” towards them.
It is a “good” action to do something helpful for others.
We feel that we should do “the good” and should not do “the bad”.
These are mind laws.
Mind laws are only possible in a world of mind which is disconnected from the physical world.

A robot that gets happy when winning the first place in a sports day, or a robot that cries with a friend who has been rejected by their crush.
If such robot existed, you would think that it has mind.
Nobody would dare to think that it is a neurological zombie.